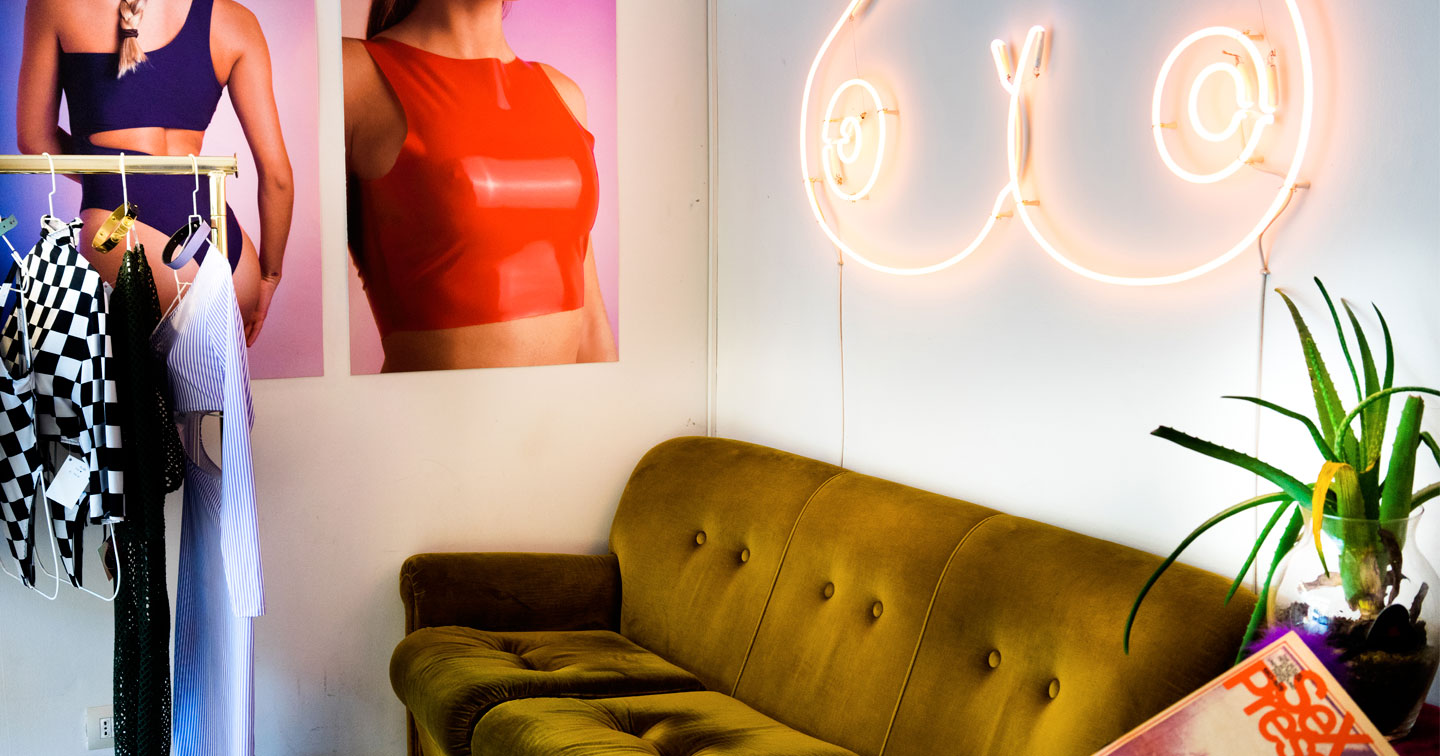 Talking about sex in Italy is still, in some regards, a taboo. Even if in Milan there’s a much more relaxed atmosphere compared to other cities in our ever-Catholic peninsula, the path to sexual liberation is long and full of obstacles. Frida hasn’t turned thirty yet, but her WOVO Store – a couple of square meters where she sells lingerie, latex […]

Talking about sex in Italy is still, in some regards, a taboo. Even if in Milan there’s a much more relaxed atmosphere compared to other cities in our ever-Catholic peninsula, the path to sexual liberation is long and full of obstacles. Frida hasn’t turned thirty yet, but her WOVO Store – a couple of square meters where she sells lingerie, latex products and a sophisticated selection of sex toys – was in many ways a risky bet.

“I lived in London for a few years, collection material for my online business. Back then I was mainly selling handmade women’s clothes. I didn’t have that much of a following; if you don’t sell well-known brands, it takes a while to get started. But I already had a good selection of lingerie and I noticed it was working very well. So when I came back to Milan some years later, I decided to focus on that.”

Frida had never been very involved in the fashion industry, but she had wanted to open her own shop ever since she was a child. “My grandma is a seamstress so I’ve always loved fabrics, shirts, dresses, buttons – I was spending a lot of time with her so I was super fascinated by that world. As a kid, I pretended to have a shop as a game. I had no idea what I would be selling, but it didn’t matter, I was just imagining a place that would welcome anyone as a friend. Maybe it’s because I’m an only child, but I’ve developed a sociable side of my personality that has led me here.”

“In the three years I spent in London I tried to look for a place, but the rent was prohibitive and, on top of that, something happened that I really wasn’t expecting: some people thought my products were scandalous, they told me that stuff was ‘too racy’… Can you believe it? Then, in October 2015, I came back to Milan – I was working as a stylist, which is not really my thing. I kept selling products on my website, but I felt the need for direct contact with people. So I started looking for temporary shops in Milan without much hope considered my previous experience in London. Then I found this place. The previous owner was selling wedding dresses! Let’s say I turned the situation around. Two years ago, on my birthday, I signed the contract – I was 28. I spent the whole summer looking for suitable pieces of furniture because it was all white here. I had no budget so everything is second-hand. But it works!”

Indeed, the first thing you notice when you enter WOVO is a huge pair of neon tits – we imagine they work as a disclaimer, too. If you aren’t ready to look straight in the face of this dimension of sexuality, to play with it and strip it down of any prejudice, you better stay out.

“I never pushed in this or that direction for what concerns our bodies, I just want to pass the idea that it doesn’t matter if your boobs are big or small, if you’re curvy or skinny. Everything is fine. I sell products for every kind of body. Sure, when I organise the photoshoots, it’s difficult to find models with some flesh because the most commonly accepted standard is a slim body. So I try to insist on the opposite direction, without thinking about slim or fat bodies: what’s important to me is to accept and venerate our own body, looking for our own style. My philosophy is: do what you want, the way you want it, whenever you want it. If you want to show your belly, do it; if you want to go to the office dressed in latex, do it; what’s important is that you are not afraid of people’s opinions. To do so you need to get to know yourself and treat yourself well.” Despite WOVO having a dominantly female clientele and promoting sexual freedom for girls, Frida is quite reluctant to define herself as a feminist: “I don’t like the idea of following this sort of feminist trend that’s on right now. I don’t want to share those definitions. To me, feminism is not a category, I don’t care to be part of a category; what I care about is accepting, as a whole, the male and female bodies and the entire spectrum of sexuality. I want sex to be a subject one can talk about naturally, without any shame: there’s nothing raunchy about it and no one should feel afraid of being judged by a colleague or a neighbor. People in Milan still care too much about what other people think – it’s something we have to fight.”

At this point we can’t help but talk about the selection of sex toys Frida has displayed near the cashier and the impact they have on the clientele. “Sex toys just happened by chance. My English supplier had these glass dildos – I’ve always thought they were beautiful objects, and since they were affordable I asked myself: why not? Since I decided to keep them in store, they have probably become the best selling products.” There are not many places like WOVO in Milan, probably none at all. So, before Frida, the only place you could go to buy a sex toy was an old style sexy shop – a place that could often ward girls off. “… And then, most of the times, there’s a man behind the counter. Maybe that’s why you don’t feel like asking for advice: the lightness of the whole thing is missing. Here I try to convey the message that anything you buy is to have fun and take care of yourself. Then I always try to tell the story of the objects I sell. Many people ask me why I have chosen glass, and my answer is that it’s just a pure matter of taste. Technically there’s no such thing as good or bad, but aesthetically there’s no comparison: glass dildos are much more attractive, they’re really cool. And then there are many young girls coming to my shop: some of them have never used sex toys before. Objects that look so innocent are a good way to get started in many cases.”

Today there’s a network of people around WOVO who have chosen it as their landmark: MYSS KETA, the masked superhero of milanese nights, often dresses herself and her “Porta Venezia girls” in WOVO latex. Just like her, many others have elected Frida’s small store as a symbol of a free sexuality and femininity. “It happened by chance, too. I don’t see myself as queer, but this place took over a value of freedom and self-acceptance that has obviously attracted many people who live their sexuality without problems. We have supported each other – if you look around you’ll see that on one side there’s high fashion, with a very limited vision of bodies, and on the other side there’s the street style, which reflects mainly masculine traits. We’re something different”. Beside the most loyal friends, WOVO clients are of all sorts: “From the young girl to the middle-aged lady who wants to play with her body. Beautiful moments happen when these worlds collide, when the 60-years-old lady is in the dressing room trying a latex dress and the young girl says: ‘damn, you look good!”

“The greatest satisfaction since I opened WOVO is that people still support me, they come here and are interested in what happens between these walls. When I opened the shop I wanted it to become a meeting place. The products I sell are almost an excuse: the best part is just sitting on the sofa and talking, exchanging ideas and getting to know other people. My biggest reward is knowing that here people have met who otherwise would never have know each other, and maybe they have started projects together, with or without me. Seeing that this place has become bigger than me, has overcome me and now has an energy of its own. This is what I’ve always dreamed of doing”.

VIA OLMETTO AND THEREABOUTS: I love walking in the tiny streets of Milan’s city centre, especially at night, when no one is around and the light is yellow. I suggest everyone to get lost in the area behind Missori, in those streets where there are no shops and barely a moped passing by.
CERMENATE MARKET: I was born in Barona neighborhood and I love the area extending from there to Chiesa Rossa. That’s really my neighborhood. I’ve always loved this market where my grandpa used to go.
VIA OSOPPIO MARKET: Another market, another place from my childhood.
RITA: Every once in a while I have a drink in this bar. My favorite cocktail is called “Stecca Lecca” and it’s made of lemon and licorice. Total.
THE YARD: In case you want to have an aperitivo in pure PIMP style.

THIS TRIP IS NOT A TOUR*

10 THINGS TO KNOW BEFORE YOU GO TO MYANMAR